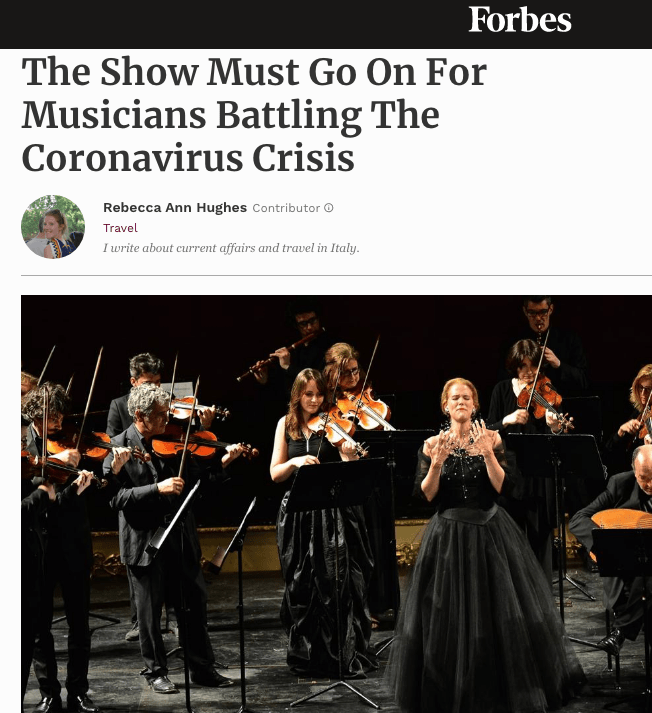 The Show Must Go On For Musicians Battling The Coronavirus Crisis.

“A lot of performers live for that moment when people start clapping,” says Liesl Odenweller, a soprano originally from America and now living in Venice. She is the co-founder of the Baroque ensemble Venice Music Project. She explains how her group, like many musicians, has spent most of 2020 fighting for its existence by adapting to the trying circumstances the coronavirus pandemic has thrown up. Despite lockdowns initially seeming to crush most of the culture sector, creative solutions have revived concerts and performances and perhaps even generated new opportunities.

At the end of February this year, all eyes were on northern Italy as the novel coronavirus began its inexorable spread. Venice’s renowned Carnival was halted before its final day, but few would have predicted at that point how protracted the emergency would become. “We were getting prepared because we were supposed to open our season on March 1,” explains Odenweller, “and so we were gearing up for that and we had a countertenor flying over from the UK.” Venice Music Project is dedicated to rediscovering and reviving 17th and 18th-century music, and their inaugural concert this year should have seen them perform excerpts from G.F Haendel’s opera Giulio Cesare.

However, warning signs quickly began to emerge. “All of the sudden what really tipped me off was that the musicians’ cooperative that I start a new contract with every year at the end of February said they were getting a bad feeling about the COVID situation so to hold off until the middle of the next week.” One week merged into two and then three, but Odenweller says, “Even then I was writing to our supporters and saying we’re really sad to cancel this week but we’ll see you next week.”

Just as many thought, “It was a while before it really sank in that things had started to get serious and we realized nothing was going to happen for a long time or at all this year,” Odenweller admits.

It wasn’t until the end of April that Odenweller and her group could even think about reviving their concerts with online and live streaming options. “Going online wasn’t even an option for a long time because we weren’t allowed to be in the same space together. But at the end of May when things began to open up again here I thought about it. Someone suggested a live streaming platform and that was the catalyst. I approached a friend and everything fell into place.” Venice Music Project live-streamed a concert from Palazzo Loredan dell’Ambasciatore on the Grand Canal, selling over 120 tickets. “That was astonishing because we’ve never been able to have that big an audience because we’ve never been in a venue that can accommodate that many people.”

In October, Venice Music Project began a program of online concerts. Odenweller explains that the transition online was a little disconcerting at first. “I love to be able to see and interact with my audience and individualize the experience. You just have to pretend there are people out there and play to the camera, but even that is not as satisfying.” In addition, the lack of applause was “too weird”, says Odenweller, “so we decided to stand up and take a bow anyway in the hope that people are applauding in their living room. It makes it more complete for us.”

However, there were upsides. “We have reached a lot of people we wouldn’t normally reach, from Tokyo, Vancouver, all over the US. People have written to us saying ‘my 93-year-old mother hasn’t been able to go to concerts since January and she was thrilled.’ Things like that are very positive for us. And we’ve attracted almost 30 new donors this year.”

There was a brief window in autumn when Italy’s performers could play before live audiences again. “It was wonderful, all we could do was smile at the rehearsals, we were all so deliriously happy,” says Odenweller. But she also describes the stress involved in ensuring audience members and musicians aren’t at risk of infection.

Finding ways to continue performing under lockdown was necessary for pragmatic reasons too. “A lot of musicians have contracts with the cooperative for an entire year but are only paid per concert and so many of them did not get any income or government aid until September,” explains Odenweller. Venice Music Project’s online concerts were vital economically for many of its musicians.

Looking to the future, Odenweller is confident their in-person audiences will return as soon as they can. “I think when people can come back to live concerts they will want to. As nice as it is to watch a concert from the comfort of your living room with a pizza it’s never quite the same experience!”

But the process of taking concerts online has transpired to be more than just a way to get through the pandemic. Odenweller and her ensemble are considering concerts performed simultaneously with an audience and live-streamed with permanent cameras in non-invasive places in St George’s Anglican Church, their regular performance space in Venice. “We’ve never depended on huge numbers of people but this year with the live streams we’ve sold quite a lot of tickets. It’s great because people have been watching us from all over the place and giving our tickets as gifts.”

The decision to experiment with online performances by Venice Music Project and other groups has been a lifeline for many. With lockdown meaning months enclosed in houses and cultural institutions shut, access to online entertainment has been invaluable. “All of our lives for these months have been watching performances of some kind, whether it’s Netflix or Tik Tok,” notes Odenweller, ”and it has kept us all sane.”

Venice Music Project relies on the generous donations from its supporters and members. If you are interested in making a contribution, you can make a gift or become a member on their website.

This error message is only visible to WordPress admins